Blinded By Their Bias

One of the more interesting things that I have observed during the Covid-19 crisis is how much it has revealed the true tendencies of the liberal left and mainstream media.

A common narrative from both is that Donald J.Trump is a fascist, authoritarian, autocratic leader who does not care about individual rights or civil liberties. They say he believes he is above the law and is only interested in consolidating and extending his power over the nation.

Here is a headline from an article that follows this theme.

However, what are we seeing with our own eyes during the Covid-19 crisis?

President Trump is governing with guidelines, recommendations and working to facilitate public/private sector solutions to the crisis. He has closely followed the guidance has has received from public health experts. There have been no orders, directives or a declaration of martial law for Trump to wield authoritarian power.

Trump has deferred to the nation's Governors to fashion customized responses to individual state needs and has supported them with national resources when needed. He has been very judicious in using the Defense Production Act that would make private businesses an arm of the federal government.

Of course, the same people who have been calling Trump an authoritarian, power-hungry fascist are now questioning Trump as to why he has not ordered all Governors to shut down their states and why he is not using the Defense Production Act to force all industries to do his bidding.

The fact that Trump is following the Constitution in all that he is doing seems to be lost on these people. As President, he is being very careful to not trample on state's rights or individual liberties to the greatest extent possible in this crisis. It is the exact opposite of what a power hungry authoritarian would do.

It should also be noted that we find the most authoritarian and autocratic responses to the crisis in cities and states governed by liberal Democrats. To be fair, we have also seen this behavior by Republican governors in blue states as well.

For example, Los Angeles Mayor Eric Garcetti is encouraging people to report businesses and others who are violating his stay-at-home order. He is even offering a reward for those who do so.

“You know the old expression about snitches—well, in this cases, snitches get rewards,” he said. “we want to thank you for turning folks in and making sure we are all safe.”


Garcetti also threatened to cut off the power and water to any non-essential business that continued to operate in violation of his order.

A lone paddleboarder was arrested in California for violating Governor Gavin Newsome's statewide stay-at-home order. The man faces a jail term of six months or $1,000 fine, or both, if convicted of the charge. 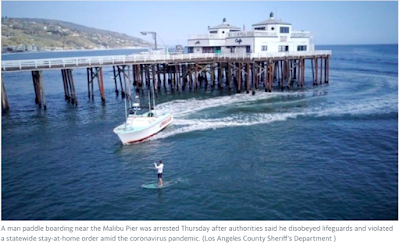 In Vermont, Republican Governor Phil Scott has ordered that all big box stores like Walmart, Target and Costco must stop the sale of nonessential items in the store even if they are allowed to be open to sell "essential" items.

These stores are supposed to take nonessential items off of the shelves or block customers from the aisles that have these items even as the store is open.

One of the nonessential categories is home and garden items. Therefore, you can go into the store to buy lettuce or carrots but you would not be able to buy the seeds to plant your own garden this spring. You also would be prohibited from buying a fishing rod at Walmart if you wanted to fish for your dinner rather than make another trip to the grocery store. How much sense does this make?

Trump is a "full-on authoritarian"? Compare his actions to some of the examples above.

How often do we also hear those on the liberal left decry economic injustice and privilege?

Who is being hurt the most from what we are going through?

I can assure you it is not the political class, public sector employees or limousine liberals.

Those being hurt the most are those that liberal Democrats claim are the people they want to help the most.

The people that are most vulnerable to what is going on with Covid-19 are lower and middle class workers who don't have the luxury of being able to work from home. They are in the front lines at work or have lost their jobs. They most assuredly are not "sheltered at home" in any shape or form.

The coronavirus is spreading a dangerous strain of inequality. Better-off Americans are still getting paid and are free to work from home, while the poor are either forced to risk going out to work or lose their jobs.


This chart shows how large the impact is on those as you go down the income ladder.


Who is the one who talks most about getting America back to work?

Why is President Trump castigated and ridiculed by the Left and mainstream media for wanting to get Americans back to work?

And considering the reality of the numbers in that chart, why did the Governors in Virginia and Maryland institute stay-at-home orders until June 10 hours after President Trump extended his guidelines until April 30?

This is nothing compared to what former Obama health advisor Zeke Emanuel said on MSNBC. By the way, Emanuel is also said to be Biden's top health advisor on his campaign. 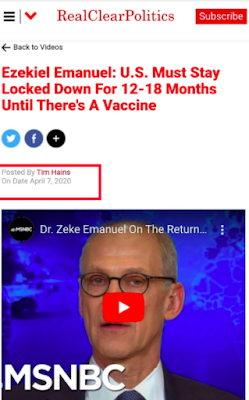 12-18 months? Will there be a United States of America left by then if this was the policy put into place?

Below is another interesting chart I came across recently on Twitter. It was prepared by The New York Times and it uses cellphone data to assess which counties across the nation had the most travel last week compared to normal.

I thought it was an encouraging chart in that it showed just how effective social distancing and the stay-at-home orders have been. This is readily apparent in looking at the northeast part of the country and states like Ohio, Michigan, Illinois, Indiana and Wisconsin. It shows almost no travel is going on.

However, this was not how some of the liberals on Twitter saw it. They see everything as an  opportunity to demean and belittle anyone who doesn't breathe the rarefied air of their enclaves of privilege and pomposity.

A few examples in the responses to this chart that were on Twitter.

Do you notice a common theme? It doesn't matter the circumstances. There is a constant refrain from many liberals to denigrate and demean anyone who doesn't share their world view. Multiply it ten-fold if it has anything to do with Donald J. Trump or his supporters.

What seems to be lost on these people is that those areas in red on the map are mostly in rural areas with very low population density. They don't have a Whole Foods or Trader Joe's up the street they can walk to. They might have to drive 20 miles to get to an IGA. There is no corner drug store.

In fact, a lot of those people are still doing their jobs in growing crops and delivering essential items to the local stores of these self-righteous nincompoops in their mega metro areas.

In addition, if those people who were so quick to comment on Twitter had been willing to take the time to look a little closer at the map, they would have seen that there was no difference in the behaviors of those in the large metro areas in the red states than what is going on in the metro areas of the blue states.

I have highlighted the low travel in metro areas such as Raleigh-Durham, Charlotte, Miami, Atlanta, New Orleans, Nashville, Kansas City, St. Louis, Dallas-Ft. Worth and Houston. There is no "red" there. 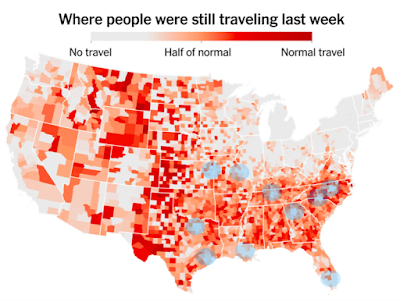 The Covid-19 has been a massive wake-up call to our nation. It should cause every American to take a step back and reconsider a number of questions.

Should we rely on China and others for critical medical supplies and drugs?

Should we rely on China and others for a number of other strategic materials and goods?

How reliant should we allow ourselves to be on any other country in our supply chain of other goods?

How much can we trust Communist China to be transparent and open about issues that could have worldwide effects?

Seeing the risk of disease coming across the border so easily, should we be implementing much stronger measures at border control?

Can anyone still believe that an open border policy really serves the American people?

How much should we trust models to determine the expenditure of trillions of dollars? If the models in this case can vary 80-90% in a couple of weeks, how much trust should we put in climate models that are forecasting events a decade or more in advance?

There are many more.

One thing that has been answered unequivocally is that much of what comes out of the mouths of the mainstream media and Democrats about the fascist, authoritarian Donald Trump could not be further from reality.

It is in full view every day.

Unfortunately, too many people are blinded by their bias to see what is right in front of them.
Posted by BeeLine at 8:23 PM