I have generally been supportive of Dr. Anthony Fauci who is considered the nation's top infectious disease expert. 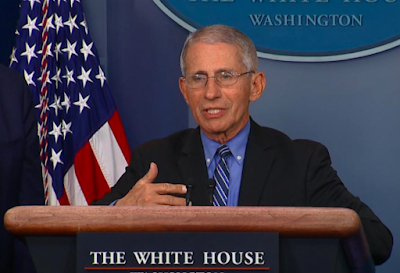 He comes across as someone who doesn't mince words and is a pretty straight shooter.

However, I must also admit that I have seen some things that have troubled me when it comes to Dr. Fauci during the Covid-19 crisis.

First, Fauci has had the top job regarding infectious diseases at the National Institute of Health since 1984---36 years.

As people begin to ask whether we should have been better prepared wouldn't the first person that should be questioned regarding that lack of preparation be Dr. Fauci?

Yes, I know he is only a bureaucrat and he doesn't control funding and the like. However, politicians have one million issues (and especially Presidents) on their plates. Fauci had responsibility that included one very big issue---our response to a pandemic. Did he use his platform and his influence effectively to insure we were prepared?

Fauci also seems to have been going out of his way to defend the World Health Organization and China in their responses to the Covid-19 crisis.

Again, I understand that Fauci must have a lot of friends in the WHO and with infectious disease experts in China. However, it would seem to be better to say nothing than defend the actions of the WHO and China in all of this.

China clearly did not share the seriousness of the outbreak with the rest of the world in a timely fashion that might have allowed the virus to be contained. It did not share the RNA sequence of the virus for nearly two months after it first appeared. That information was critical in order to develop test kits. As cases around the globe increase, the cases and numbers that the Chinese have published also look more and more suspect.

The WHO seems to have been complicit in the Chinese cover-up in that as late as mid-January it was still stating that there was "no clear evidence that virus was being transmitted by human-to-human contact." Further, the WHO criticized Trump's China travel restriction claiming that it "would not help."

I also have a hard time in understanding how Dr. Fauci can stand up at those press conferences and say that his sole focus is on health recommendations to the President. He is being charged with overseeing the public health of the United States. Yes, that includes the nation's short term response to the virus. However, how do public health concerns also not extend to the longer term implications of the economic shutdown. He says he is not an economist. In my view, it is not enough for him to say that it is not his concern. There is a public health component in that as well that he should be considering and weighing in his recommendations.

I really came to question Dr. Fauci this weekend when he was interviewed by Jake Tapper on CNN's State of the Union and Fauci intimated that he and other public health officials had advised President Trump to shutdown the country in the third week of February.

Of course, this exchange led to this salacious headline. I guess we could have shutdown the country for the entire year of 2020 and the numbers would be even better.

I don't know what Fauci might have advised President Trump between February 15 and February 22.

However, I do know what Dr. Fauci was telling the rest of the country in February at the same time.

Before I get to that, let me give you some context on what the confirmed cases from Covid-19 were in the United States the third week of February when Fauci was interviewed by USA Today.

This is what Fauci told USA Today on February 17 when asked how worried Americans should be about coronavirus.

Could Fauci be that two-faced that he told the President to shut the country down at the same time he was telling everyone else that "the risk is really relatively low'?

Q. Bottom line, how worried should people in America be?

A. The risk of coronavirus in this country is still relatively low, but, as I said about the possibility of emerging into a pandemic, this could change. As of today, on the 17th of February, the risk is really relatively low. But we, the public health officials, have to take this seriously enough to be prepared for it changing and there being a pandemic.

In the same interview Fauci spoke of China's efforts to contain the virus that included locking down 50 million people. USA Today asked the obvious question regarding the United States.

Q. That would never happen here, would it? Locking down 50 million people?

A. No, not a chance. It would never happen.

I guess you could argue he was right. We only have  250 million people under lockdown in America right now.

Again, I ask the question---if Fauci had advised the President to shutdown the country in mid-February, why would he be saying this to the public at the same time?

Fauci was either not truthful in the interview or he was not being truthful with Jake Tapper this weekend.

It does not end there.

Dr. Fauci was on the Today Show on February 29 where he was asked whether Americans needed to stop anything they were doing in their daily lives? He was specifically asked whether people should stop going to the mall, the movies or the gym? Fauci stated that there was no need for Americans to change anything in their day-to day lives at that moment. However, he also admitted that may have to change.

You can see the video here.

The reality is that it would have also been very hard for Fauci, the President, or anyone else to convince the American people to take the dramatic actions we under right now at a time with 34 confirmed cases among 330 million people.

Did Fauci really tell the President something different a week or two before?

It is hard to believe that Fauci was pounding on President Trump's desk telling him to "shut it down" when we see what he was telling everyone else.

I am not going to call Fauci two-faced because I don't think he did that in the Oval Office.

In fact, at today's press conference Fauci confirmed that he never made a recommendation to the President that was not acted on. Not once.

What this looks like to me is another life-long government bureaucrat trying to cover his rear end as the advice and the expert opinions he shared look increasingly suspect.

As this crisis passes and people look for those to cast blame, I believe that the public health bureaucrats should be first on the list. As I stated above, President Trump and the various Governors have a million issues to be concerned with. Whether we have enough test kits and ventilators in reserve to deal with a pandemic is not going to be very high on that list.

In my view, the CDC's role in all of this has been absolutely atrocious. It completely botched getting test kits out early. It also vastly slowed down the process early on by insisting that all test kits had to be processed at the CDC lab in Atlanta. This left state public health labs completely out of the loop. As a result, precious time was lost in reacting to the virus.

President Trump finally lost patience and brought in the private sector and took control of testing away from the CDC. You may have noticed that CDC experts have rarely been present at Trump press conferences.

It should not be lost in all on this what I wrote about the failures of the CDC in responding to Ebola back in 2014. As a result, I can't say any of this was a surprise to me.

One of the interesting things I found in researching that blog post was that the CDC had spent $3 billion in its Prevention and Public Health Fund over the previous five years. However,  three times as much money was spent on community transformation grants (healthy foods, inner city grocery stories, bike lanes and street lighting) as was spent on programs protecting, detecting and responding to infectious diseases and other public health threats.

How did bike lanes and street lighting become more important to the CDC than pandemic preparation efforts?

What more do you have to know about the priorities of the Centers for Disease Control and Prevention and the bureaucrats who are in charge?


The deep state seems to be just as deep in the public health bureaucracy in our government as anything else.
Posted by BeeLine at 8:51 PM