Is it a National Crisis or a New York Crisis?

One of the big questions that I think most people have about Covid-19 is whether all of this has really been necessary?

We were told that we had to flatten the curve. If we did not do that our hospitals would be overwhelmed and hundreds of thousands might die due to lack of care.

Of course, flattening the curve does not mean any fewer people will get the virus. It just spreads out the time period over which people get infected. It also does not decrease the numbers who will naturally die from the virus. It only prevents those who would die who could have otherwise been saved with hospital intervention if those resources were not overwhelmed.

You can see this in the graph from the CovidActNow.org model for Ohio that I shared in a previous blog post in late March. The area under the green curve is the same as the pink curve. This was the model as of March 27. 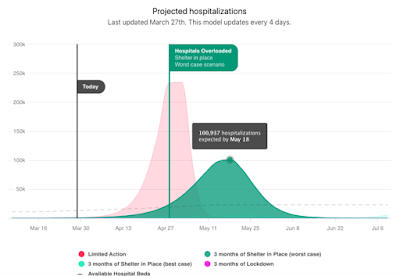 These were the predicted outcomes that could be expected after 3 months according to the model at that time. Even with 3 months with a shelter in place policy it was projected there would be 7,000 to 174,000 deaths in Ohio.


Massachusetts also just released their summary data on deaths for the last two weeks by age groupings. 59% were over the age of 80. 85% over age 70.

These are actual counts rather than percentages.


Looking at the data, the obvious question is what is the "excess mortality" of this disease? In other words, when we put everything together how many deaths can really be said to be above and beyond what we would have expected otherwise?

The surveillance system monitors visits to medical providers for flu-like symptoms as well as tracking deaths from the flu and pneumonia (P&I) as a percentage of total deaths.

This data can be very useful in answering the question of what the excess mortality is of Covid-19 when all is said and done. It is a little more difficult in getting absolute answers today because of lags in the reporting of the data.

This chart shows deaths from P&I as a percent of all deaths for the previous 5 years before the 2019/20 flu season.


You can see that 2014/15 and 2017/18 saw much higher P&I deaths than normal. However, those deaths typically spiked in weeks 1 to 10 of the year (January 1-March 15). Those spikes also usually resulted in about 11% of deaths from all causes. Deaths in a normal year usually spiked at about 7-8% of all deaths.

This is the chart of 2019/20 from the CDC. Notice that up until week 10 there was nothing out of the ordinary going on with deaths from P&I nationally. However, it exploded upwards starting about that time. That has to be the result of Covid-19. Deaths in week 14 were 12.9% of all deaths.

This would seem to suggest excess mortality is present. However, what about the fact that deaths earlier in the year were much less than other heavy flu seasons? Considering the age of most of the victims could it not be argued that had we had a tougher flu season in January-February some of those individuals might have succumbed earlier to seasonal flu?

In reviewing the CDC data I was also interested in seeing what "total deaths" have typically been over the years since these charts only compare P&I deaths as a percent of total deaths. What do we typically expect "total deaths" to be and how does that compare to what we are seeing right now?

Here is a chart that shows average "total deaths" from all causes for the last four years for weeks 9-14 according to the CDC. I have compared it to "total" deaths reported from all causes for the same period from the CDC for the current year. These are all the weeks that the CDC considers to be 100% complete for data purposes. That is data through April 3. 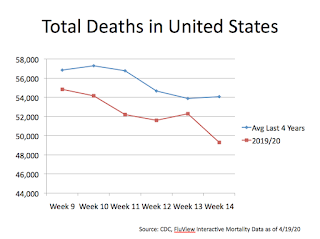 Total deaths from all causes is actually less this year than the average of the previous four years.

How is that possible with what we hear on the news each night?

How is that possible considering what we have done to our economy?

My guess is that some of this is due to a lag in reporting. The CDC data is incomplete even though its website claims the data is 100% complete for weeks 14 and prior as shown in this screen shot.


I do not believe that is true so in the chart below I have adjusted the current year deaths upwards on the assumption that we will eventually find that the CDC data is not complete right now. I adjusted deaths in week 9 upwards by 1.02x and increased the adjustment by .02x for every week until I made a 1.12x adjustment for week 14. That suggests that week 14 data is only 88% complete. 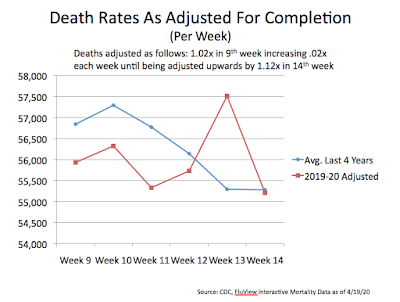 Even with this adjustment, this data does not show any excess mortality in the aggregate for this six week period in 2020 compared to the average of the previous 4 years. In total, this year is about 1,600 deaths short of the four year average.

This is not to say that this will not change. Deaths lag Covid-19 cases and we will definitely see some excess mortality in April (weeks 15-18) where we normally see lower overall death counts as the seasonal flu season has run its course. The daily death totals we have seen in April should guarantee that. In addition, total deaths usually decrease by 2,000 per week in April compared to March which should also push excess mortality totals higher.

There is also no question that we have seen excess mortality in New York City in the data already.

I know there are some who are questioning whether all of the Covid-19 deaths being reported are really due to the virus.

When you see total deaths running as high as four times normal in New York City there is little doubt that there is a lot of excess mortality taking place and Covid-19 is the cause.

If the national numbers show no excess mortality over the last six weeks, even though New York City has had so much, that has to mean that deaths are actually down even more in the rest of the country compared to what we would normally expect.

I intend to closely monitor the CDC FluView surveillance website in the weeks ahead to see if it provides some further perspective on all of the questions that are out there.

We should also learn a lot from the CDC surveillance data on what occurs when some of the mitigation policies in the various states are lifted. Will we see an immediate increase in cases as the CovidActNow and other models suggest? Or will warmer weather and a lower R0 help keep the lid on the contagion?

However, looking at the data as of now I have to ask...

Is this a national crisis or is it a New York crisis?