What Is Going On?

The implementation of social distancing measures and the shutdown of our economy was originally  justified as necessary to insure that our hospital systems were not overwhelmed. 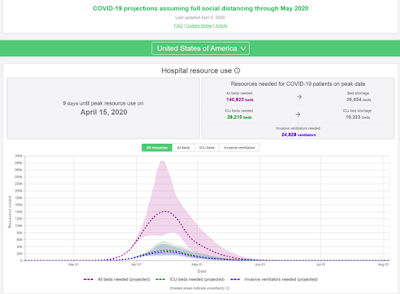 We are now two weeks after April 15 and we know that none of this was remotely close to being accurate in the United States as a whole. The New York City metro area saw enormous pressure on its system but even that area did not run short of beds, ICU capacity or ventilators.

Some say that it is due to the fact that strong social distancing protocols were implemented in almost every state. However, the models from mid-March forward assumed full social distancing would be in effect through May, 2020.

We are now facing a harsh reality that is a consequence of the reliance on those models by government policy makers.

We have not seen overwhelmed hospitals. The reality is that we are seeing nearly empty hospitals from coast to coast.

Consider this headline from yesterday concerning the world-famous Mayo Clinic.

The Mayo Clinic's flagship hospital in Rochester, Minnesota is currently at about 35% of capacity. Mayo's surgery services at its three locations (Minnesota, Arizona, Florida) is at about 25%.

The action is being taken to attempt to mitigate a projected $3 billion loss for the year. Many employees are being asked to take extended furloughs until there is increased demand for health services. The pay cuts include 20% to top executives, 10% for all physicians and 7% for salaried employees and will be in effect for the rest of the year. Even with all of these actions, Mayo is expected to lose over $1 billion for the year.

What is going on when 30,000 employees at one of the most well-regarded hospital system in the entire world are being furloughed and have their pay cut in the middle of a global pandemic?

Let's look at the confirmed cases and reported Covid-19 deaths in the three states where the Mayo Clinic has facilities.

For additional context regarding the Minnesota numbers, 223 (78%) of the deaths have been of people who lived in senior long-term care facilities. That means that there have only been 63 deaths out of everyone else in a state of almost 6 million people.


As of now, Democrat Governor Tim Walz of Minnesota has still not decided whether he will remove or extend the stay-at-home order for the state that is currently set to expire on May 4.

If all of this is not enough, consider the most recent data from HealthWeather.US which tracks readings from smart thermometers around the country. This is helpful information which allows for the high-level surveillance of fever-based seasonal illnesses such as influenza and Covid-19 in the United States.

The chart below shows the % of thermometer readings that are higher than normal. You can see that  fever-based illnesses were following a typical seasonal path until the beginning of March when we began to see atypical experience. That is when Covid-19  started to take hold in the country.

The variance reached a peak on March 16 with about 5.1% of the population showing signs of illness compared to an expected 4.2%. Interestingly, this is also the exact time that many states started social distancing rules. 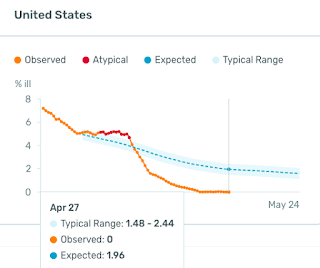 Where are we now?

In a nation of 325 million people, the number of people with a fever is almost imperceptible. That has also been the case for almost two weeks.

It as if we have practically wiped out all fever-related illness in the United States.

Considering all of the facts above, it would not seem that a decision on opening the economy (and hospitals) should be a difficult one in many parts of the country.

The Mayo Clinic is also hardly alone as a hospital that finds itself with few patients during this pandemic.

Beckers Hospital Review is keeping track of all of the hospitals in the United States that have furloughed workers in response to Covid-19.

This is the list of hospitals that announced furloughs on April 27 alone.


1. Citing a revenue loss due to the COVID-19 pandemic, Jackson-based West Tennessee Healthcare has furloughed 1,100 individuals of its 7,000-person workforce. The health system said it lost $18 million in March due to the statewide ban on elective procedures that went into effect March 23. To comply with the order, the health system temporarily shut down some hospital departments as well as its outpatient surgery center.


2. Annapolis, Md.-based Anne Arundel Medical Center has furloughed 1,000 employees due to low patient volume and other financial challenges brought by the COVID-19 pandemic. All furloughed employees received 80 hours of pay and are able to retain their benefits through June 30. The medical center said it plans to redeploy some of the furloughed workers to support an anticipated COVID-19 surge.


3. Lexington, Ky.-based UK Healthcare has furloughed 1,500 employees to help offset a COVID-19-related revenue loss, according to Kentucky.com. The health system said it has seen a drop in the number of services offered after elective procedures were canceled statewide in March. The health system said earlier in April it planned to place some employees on unpaid leave after April 25 if the pandemic continued to affect operations.


4. St. Joseph Hospital in Nashua, N.H., has furloughed 300 employees due to the COVID-19 pandemic, according to WMUR. The furloughs affect about 20 percent of the hospital's employees. In March, the hospital said it lost $3.6 million in revenue, a number expected to double by the end of April.


5. Citing a financial hit from the COVID-19 pandemic, Fresno, Calif.-based St. Agnes Medical Center has furloughed 175 employees, according to ABC affiliate KFSN. The hospital said it has seen a large drop in the number of elective surgeries and emergency room visits during the pandemic. Affected employees are able to retain healthcare benefits.


6. Pikeville (Ky.) Medical Center has furloughed more than 200 employees amid mounting financial pressure due to the COVID-19 pandemic, according to WCHS TV. The medical center said that the furloughs are necessary because it is predicting a "significant historical financial loss for April." The furloughs took effect April 26.


7. In an effort to offset financial losses due to the COVID-19 pandemic, Cody (Wyo.) Regional Health said it is furloughing a portion of its nonclinical staff, according to The Cody Enterprise. The health system said the furloughs will last at least two months. Since the crisis began, Cody Regional Health's revenue has been down 60 percent, according to the report.


8. Citing a decrease in patient volume and revenue, Mobile, Ala.-based Infirmary Health has furloughed a portion of its staff, according to NBC 15. Affected employees will retain their healthcare benefits.


9. Show Low, Ariz.-based Summit Healthcare, projecting a revenue decrease of 40 percent to 50 percent due to COVID-19, is asking employees to voluntarily take furloughs, according to the White Mountain Independent. The hospital system said that the state ban on elective surgeries has significantly reduced workloads and volumes. The voluntary furloughs would begin May 2 and last 90 days.


10. Dalles, Ore.-based Mid-Columbia Medical Center plans to furlough employees beginning May 3 in an effort to help offset losses attributed to the COVID-19 pandemic, according to The Dalles Chronicle. The furloughs will affect departments that are not seeing a high patient volume.


11. Due to a revenue loss from the COVID-19 pandemic, Stanford (Calif.) Health Care employees have the option to take a 20 percent pay cut, using paid time off, or taking a furlough, according to the San Francisco Chronicle. Employees must use one of those options between April 27 and July 4.

Who cannot see absurdity in the fact that we shutdown the economy in order to keep from overwhelming the hospital system only to find that we have accomplished the opposite?

I was clear from as far back as January that Covid-19 was something that should be taken very seriously. The early reports out of China gave me serious concerns. In addition, since so much was unknown it made sense to be overly cautious in our initial reactions.


I wrote this in January.

The bottom line is this. Potential pandemics are nothing to trifle with.

There is a reason that China has acted so aggressively in responding to the virus.


I did not disagree with the early actions in shutting schools, bars and restaurants. In fact, I argued that flights from Europe should have been banned earlier. I also argued that the New York metro area should be quarantined from the rest of the country when I saw the emerging cases there.

However, I also predicted early on that the economic contagion in dealing with the virus would very likely be worse than the disease itself.

It would seem that the hard facts that surround us now should be driving the decision making of our public officials rather than the numbers in a predictive model that have already been proven to be so far off the mark.

It used to said that the healthcare industry was recession-proof.

Unfortunately for its workers, it does not appear to be pandemic-proof.

What have we done?
Posted by BeeLine at 9:05 PM