One of the most popular blog posts I wrote last year was entitled "The Indefatigable Donald Trump".

Indefatigable is one of my favorite words.

If there is one word that should be used to describe Donald Trump it is indefatigable.

Trump doesn't tire. He doesn't quit. He is persistent and unrelenting in pursuing his goals.

Watching the Coronavirus Task Force press conferences it has occurred to me there is another word  that also describes Donald Trump. I like this word as well. I have written about it before. However, when I wrote about that word back in 2012 Donald Trump was far from my mind.

This is that word.

Donald Trump is not afraid to challenge conventional wisdom. He is not afraid to attack and callout institutions like the WHO, NATO and the WTO when he thinks they have not served the interests of the United States of America. He is not satisfied with the status quo.

He is not even afraid to challenge scientists and doctors to ask if there may not be a better way.

Of course, this drives the media crazy and they immediately attempt to paint Trump as unbalanced, insane or ill-informed.

One example is Trump suggesting trying hydroxychoriquine as a treatment for Covid-19 given its proven history of safely treating malaria and lupus and evidence from some doctors that it shows promise in helping some patients  recover from the virus. Another is his early questioning of why a N95 mask could not be disinfected and reused. (Both are now being done)

Yesterday saw the White House press corps go further off the rails when Trump, upon seeing evidence that Covid-19 quickly dies when exposed to heat, humidity, sunlight and disinfectant, asked the question of the experts whether it was possible to use UV light or something like an injection cleaning to kill the virus internally.

This is the transcript documenting  exactly what Trump said at the press conference which I watched live. 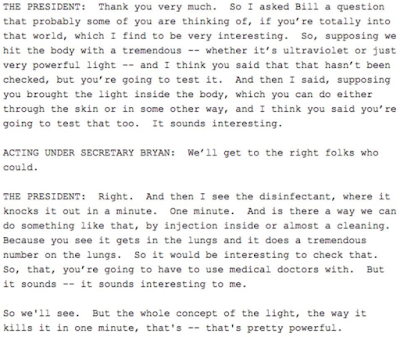 The media jumped on this and said that Trump was telling people to inject Lysol into their bodies or that he was claiming that going out into sunlight would cure someone of Covid-19.

As shown above, he said nothing of the sort. He said these things might be worth researching with medical doctors. He said these were interesting topics for further research.. He said it would be powerful if it would work.

He was merely raising the question of whether further research could be done to see whether those things that kill the virus outside the body could somehow be modified to impede the virus inside the body.

Is that "out there"?

Yes, it is. However, that is what an iconoclast does. They challenge traditional or conventional ideas. Most progress in the world has come from someone challenging the status quo or asking whether there might be another, or better, way.

Soon after I saw Trump suggest the use of UV rays inside the body to kill the virus I came across this YouTube video.

What are doctors and researchers at Cedars Sinai Hospital in LA working on? They have developed what they call a Healight that does exactly what Trump asked about.

Is Donald Trump crazy or is he just an iconoclast that is two steps ahead of most everyone else?

I don't know about you but I want a President who is not afraid to ask these two questions with regard to almost any issue presented to them.

Read what I wrote about iconoclasts in 2012 and my wish that one day soon we would get a few in Washington.

Eight years later, we actually may have one.

I`con`o`clast/ n / A person who does something that others say can't be done.


"We can't solve problems by using the same kind of thinking we used when we created them."

I am currently reading a book titled "Iconoclast" by Gregory Berns who is a Professor of Neuroeconomics at Emory University.  Berns delves into the reasons that iconoclasts are so creative and successful.  He also explains how we can all become more iconoclastic by learning to see things clearly for what they are and not being influenced by other people's opinions.  By not letting fear rule our decisions and by learning the necessary social networking skills so that other people will eventually come to see things the same way as the iconoclast.

Berns introduces the book with a story about Howard Armstrong.  That is a name I was not familiar with but he was quite a man, and quite an iconoclast.


More than any other person, Armstrong was responsible for the three basic technologies that make radio and television possible.  In addition to his first discovery, called regeneration, which is the technique that allows radio signals to be amplified, Armstrong invented the superhetererodyne receiver, which transforms high-frequency waves into audible sound waves.  But his crowning achievement, and his ultimate undoing, was the creation of FM radio-a technology that the entire radio industry had dismissed as inferior.

We all know now that the sound quality of FM radio is vastly superior to that of AM radio.  However, Armstrong was alone in his belief of the superiority of FM in the 1930's when he developed the first FM receiver.  He was discredited and disparaged by the AM adherents who only knew what they knew.  He ultimately took his own life in 1954 not knowing that his iconoclastic views would eventually be fully accepted after his death.

I have been thinking a lot about iconoclasts this year which led me to an interesting article in today's Wall Street Journal about 13-year old Aidan Dwyer from Northport, NY.  This young man looks to me like a budding iconoclast.


This past summer, Aidan won a national science competition with what seemed to be a bright idea: His research appeared to show that solar panels arrayed like the leaves on a tree collect sunlight more efficiently than traditional setups.

Many people on the Web called the Long Island teenager a "genius" who had achieved a true "breakthrough" in solar power. Others praised him for proving that nature's own designs are superior to man's.

But there was one little problem: To prove his hypothesis, Aidan had measured the wrong thing.

As readers figured out the mistake, the Internet went supernova. Commenters and bloggers attacked Aidan with vitriol usually saved for political enemies and the Kardashians. Blogs decried his experiment as "bad science" and "impossible nonsense." Someone called him "an alien—a cool one, though."

Aidan and his family watched in amazement as strangers around the world debated his intelligence and abilities, as well as his opinion of subjects generally beyond the scope of a suburban boy his age: politics, evolution and the state of modern society, for example.


Does that sound somewhat similar to the experience of others like Howard Armstrong who advance a new and novel idea?  How did Aidan see something new and what got him cross-wise with so many others?


On a recent afternoon, Aidan and his parents admitted they were somewhat baffled by the attention for a project that began two years ago on a winter hiking trip through the Catskill Mountains.

Aidan, then 11, stared at the tree branches denuded of leaves and noticed they looked alike; he wondered why. Back home, his parents encouraged him to research the subject. Google searches uncovered that a mathematical concept called the Fibonacci number sequence underlies the structure of tree branches.

His parents had been hoping to install solar panels on their Long Island house, but their yard was too small and their roof wasn't suitable. There was, however, enough room for a tree. Perhaps, Aidan postulated, trees arranged their branches to improve the collection of sunlight. If he used the Fibonacci sequence to imitate that design with solar panels replacing leaves, maybe the structure could fit his family's limited space, look pretty—and power the house.

He did chores to earn the money to buy about $75 worth of materials. With help from his father—and after many mistakes—Aidan ended up with two models: a traditional flat-panel array and a tree-shaped solar collector designed to mimic the branch sequence of an oak tree. Over the course of months he compared measurements. To his delight, the tree structure's numbers were higher.

Exuberantly, he submitted the results to the Young Naturalist Awards, a national contest run by the American Museum of Natural History. Of 700 entries, his was picked as one of 12 winners.

"Then," Aidan said with a slight smile, "things got out of hand."

As the report went viral, attacked and championed in hundreds of comments, museum officials became worried. "We do think it's really important that information that we put forth is scientifically accurate," said Rosamond Kinzler, senior director of science education at the museum. They were also concerned for Aidan, she said.

Critics had a point: Aidan had recorded voltage, when he needed to calculate power. It is a serious flaw, explained Jan Kleissl, an assistant professor of environmental engineering at the University of California, San Diego.

Imagine a water pipe, he said. Voltage is equivalent to water pressure. Current is the size of the pipe. Power is equal to the flow of water out of the pipe, which depends on both variables.

Aidan has not been deterred.  He has listened to the constructive advice he got, ignored the critics and the vitriol, and gotten back to work.  A true iconoclast.


On a recent afternoon, Aidan showed a visitor his newest model, tweaked to respond to his critics: a towering seven-foot tree form adorned with solar panels and painted green. He is now measuring current and power. So far, he said, the tree continues to outperform the traditional panel. "I'm thinking that it could actually change the world."

Aidan may or may not be proven right in the end.  However, it is people like Aidan, Florence Nightingale, Henry Ford, Walt Disney, Jackie Robinson and Steve Jobs that move us forward as a society.  My fervent wish for 2012 is that we will send some iconoclasts to Washington.  We need them so that people like Aidan can pursue their dreams and ideas for the betterment of us all.