I have written extensively about Covid-19 over the last two months. It is an interesting subject to write about as it involves a great deal of data and yet there is still much that is unknown about the virus and the appropriateness of our response to it.

It is like to trying to put together a 1000 piece puzzle but you have no idea what you are assembling as you pick up each piece and try to put it together. As you work, you are not sure where any piece fits and you also are not sure what you are going to have when you are done. 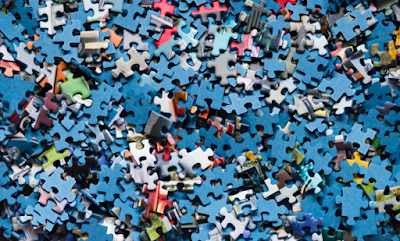 There is no better example of that than when I learned earlier this week that in my home state of Ohio over 4,000 cases of Covid-19 have been confirmed among prisoners and staff at Ohio's prisons.

As of Tuesday, when the latest prison numbers were released, that represented about 30% of all the Covid-19 cases in the state.

One facility, the Marion Correctional Institution had 2,011 inmates test positive. That is 80% of the prison's population. It is now the largest source of infections of any place in the United States. 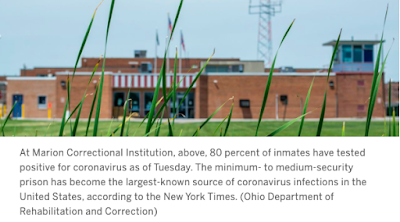 That is a great example of one of those puzzle pieces.

An 80% infection rate in one facility shows how contagious this virus can be. However, if there is any place that is about as locked down as it can be it is a prison. How did the virus get into the prison? I assume the prison had stopped allowing visitors but staff still came and went. It shows the limitations of any lockdown unless it is total and complete.

Nursing homes have also been a hot spot for the virus in Ohio and elsewhere. You don't see it mentioned at Governor Cuomo's press conferences but 25% of all deaths in New York have been nursing home residents. Part of that seems to have resulted from a questionable state policy of requiring nursing homes to admit or readmit patients who had tested positive for Covid-19 thereby putting other residents at risk.

The Ohio Department of Heath reported on Monday that 1,200 confirmed cases have been reported in Ohio long-term care facilities. These are also generally locales from which residents are not circulating much in the community. These seniors mostly were stay-at-home before stay-at-home became a state order. Visitors were banned from nursing homes in Ohio in mid-March. Nevertheless, staff go in and out even though I know all Ohio nursing homes have been doing temperature checks of everyone entering their facilities since the same time in mid-March.

If you take prisons and nursing homes together, there are over 5,200 confirmed cases in Ohio out of what is reported as slightly more than 14,000 total confirmed cases.  Therefore, almost 40% of all cases are in populations that were essentially locked down before we even locked down a good part of the other 11.7 million people in Ohio.

Compared to the dire forecasts of public health models at the outset of the virus, it can be argued that the mitigation strategy has been an enormous success. The politicians who took these actions are arguing that vociferously right now. That includes President Trump. What else can they do?


However, it has come at an enormous economic cost. Job losses in Ohio are at almost 1 million. The state is projecting at least a $5.4 billion budget shortfall for the fiscal year that ends in June. (To put that in context, the state budgeted for the collection of about $ 9 billion per year in personal income taxes before the Covid-19 hit). Ohio was expecting to end the year in surplus six weeks ago.

We still don't know what the final costs will be to local government and school budgets. It seem certain that all of us will be living with the economic consequences of the lockdown for years and years to come.

That is another piece of the puzzle. Is the economic cost and disruption to society worth it? This takes on an added dimension as it is now known that almost 40% of Ohio cases are in prisons and nursing homes. If this is the result, even after instituting a stay-at-home order for the rest of the state, it raises more questions and makes the puzzle even more puzzling.

Short of requiring the guards at state prisons and the staff of nursing homes to lock themselves in with the prisoners and patients and never go home, could any of this have been prevented anyway?

The models first estimated that almost 200,000 people could die in Ohio due to Covid-19. Based on those forecast models Governor Mike Dewine made Ohio one of the first states to ban mass gatherings, close schools, bars and restaurants and implement a stay-at-home order.

Despite those actions, on April 2, over two weeks into locking down the economy, the IMHE model was projecting that at the peak of the crisis on April 19 that Ohio would have 6,716 hospitalized of which 1,238 patients would need ICU care.

This is a screenshot of that projection that was made on April 2. Bear in mind, these projections in the model were made with assumptions that included social distancing and stay-at-home orders in place. 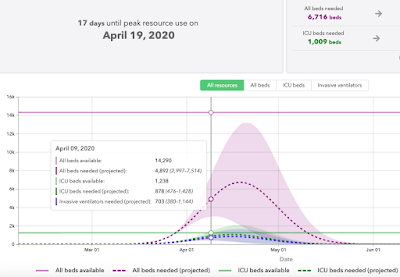 These are the actual numbers for Ohio as of April 19.

It must also be considered that Ohio only reports cumulative hospitalizations and ICU admissions in its data. Therefore, the Ohio numbers above are overstated compared to the IMHE model that is focused on hospital resource availability at a point in time.

Here is another piece of the puzzle.

To put that in perspective, that is about the same percentage of deaths that would be expected from an average flu season as seen in this chart from the CDC that shows pneumonia and influenza deaths as a percent of all deaths in the state of Ohio since 2015.


So many puzzle pieces.

So little known on how they all fit together.

And nothing is at all known on what all of this looks like when (and if) it can be put back together.

We are about to begin looking at another piece of the puzzle when various states begin to gradually open up for business.

Some alarmists argue that this is ill-advised and will inevitably result in a substantial increase in additional cases.

Others point to the economic effects and the additional harm that is being done to the nation's physical and mental health as a result of putting so many people out of work.

26 million people have now filed for unemployment since mid-March. This suggests the unemployment rate is close to 20% nationally. It was 3.5% in early March. 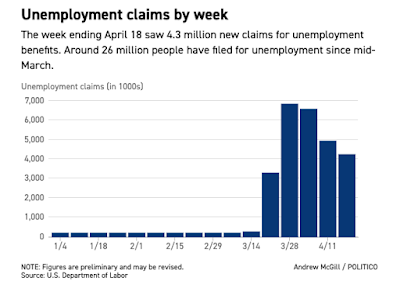 The Covid-19 puzzle. Nothing has been more puzzling in my lifetime. 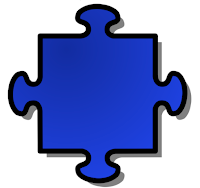