The response to Covid-19 has resulted in the closing of schools, restaurants, bars and what are called non-essential businesses. Those employees who can work from home in other businesses have been ordered to do so.

You get a sense of the effects of Covid-19 on various economic sectors in this chart of electricity usage between the first week and fourth week of March.


However, the change in electricity consumption as a result of the economic shutdown is merely a first order effect.

My concern with what has been done is that many other effects will cascade through the economy in the months (and years) to come.

There will be no larger first, second and third order effects than what these shutdowns will have done to state and local government budgets.

The car dealership that has no sales means that sales tax on new car sales is not being paid to the state.

The car salesman who is not getting any commissions is not paying any income taxes. Since he has no income he is also not buying as much and the retailer is not collecting sales tax on those purchases (if the retailer is even open for business).

The restaurant owner who had to close her restaurant has no money to pay the rent. This then means her landlord also no longer has any income to the mortgage on the property and does not have the cash to pay the property taxes that are due.

Next year, after many restaurants have closed, there likely will be a glut of commercial properties for rent. Rents will decline as will the values of the underlying properties. Property taxes will decline across the board due to the lower real estate values.

Added to this is the fact that almost all state and local governments cannot legally run a deficit. They have to balance their budget each year. They cannot borrow for operating needs. They cannot spend more than they take in.

To cover shortfalls they need to either reduce costs or increase taxes. Reducing costs means cutting services and/or employees. Increasing taxes means asking the private sector (which have had 26 million people file for unemployment in the last month) to pay more.

It is not a pretty picture and we have not even begun to see the effects that are about to cascade through state and local governments from the response to Covid-19.

That is why we are going to see unprecedented pressure put on the federal government to provide billions (if not trillions) of dollars in bailout money to state and local governments.

If you have been paying attention you have seen that it has already begun despite the fact that $150 billion in federal assistance was already made available in the CARES Act that was passed in early April.

Here are a couple of examples from a recent news story on the subject.

“Without (additional) relief, states will be confronted with the prospect of cuts to essential services,” Maryland Gov. Larry Hogan and New York Gov. Andrew Cuomo -- who lead the National Governors Association -- said in a joint statement last week, in which they called for $500 billion in federal assistance to states.

New Jersey Gov. Phil Murphy claimed in a Wednesday briefing that he will have to make “draconian cuts” without federal assistance.

“I also cannot be clearer that the choices we will have to make – absent federal assistance – are dire for our state and our recovery,” Murphy said, adding that “without substantial and direct financial assistance from the federal government, the programs we care deeply about and which we will lean on will be at risk.”


The problem is that a number of state and local governments were not on very firm financial ground, despite the robust economy, even before Covid-19 appeared on the scene.

This is why Senate Majority Leader Mitch McConnell has stated he is in favor of a more measured approach at looking at additional state and local assistance.

McConnell suggested that it might first make sense to allow states to file for bankruptcy which local governments can use but which states are currently prohibited from utilizing under the law.

Senate Majority Leader Mitch McConnell, R-Ky., suggested Wednesday on “The Hugh Hewitt Show” that states strapped for cash should be allowed to declare bankruptcy instead of getting federal bailouts to help them deal with financial problems.

"Yeah, I would certainly be in favor of allowing states to use the bankruptcy route. It saves some cities," McConnell said. "And there’s no good reason for it not to be available."

McConnell noted, however, that states are likely to agree that bankruptcy shouldn't be the first option.

"My guess is their first choice would be for the federal government to borrow money from future generations to send it down to them now so they don’t have to do that," he said. "That’s not something I’m going to be in favor of.


Predictably, Democrat Governors, Senators and House members attacked this suggestion. However, let's put this issue in some context.

Every state and local government should have been putting money away for a rainy day. This most certainly should have been the case during the unprecedented economic boom we were enjoying the last few years.

However, there is a wide disparity in what states have put into their "rainy day" reserve funds as this chart demonstrates. 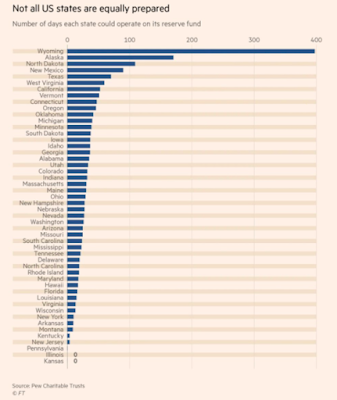 You may notice that a few of the states at the bottom of that list are also states that have been particularly hard hit by Covid-19 including Illinois, New Jersey and New York. These are also deep blue Democrat-run states.

In fact, New York was facing a $6 billion deficit for the current fiscal year ending June 30, 2020 before the first case of Covid-19 was even identified in the state.

Some type of federal aid package is probably warranted. The states can't print money. The problem is that the Democrats never want a good crisis to go to waste. You can be sure that they are looking for an aid package that will go beyond bailing them out for their Covid-19 financial problems. They are looking for a bailout of their prior bad decisions as well.

At the top of that list are the costly public sector pension programs that many states and local governments continue to use despite the fact that they were abandoned by most private sector employers long ago.

These plans have been especially dangerous in the hands of politicians who found it easy to buy labor peace with public sector unions in the short-term without taking the long-term responsibility to fund the promised benefits which may not come due for years in the future. However, the liabilities just keep get bigger and bigger with the fiscal neglect.

This chart shows the staggering cost of those pension costs at the state level as it has grown through the years. 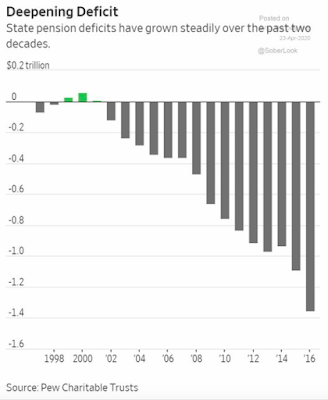 Which states have the biggest pension funding shortfalls according to the most recent survey by Pew Charitable Trusts?

Kentucky's pension plans are only 34% funded.

Again, three of these four states have been particularly hard hit by Covid-19. 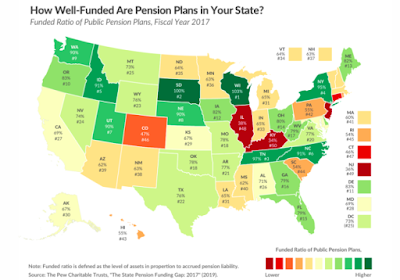 States like New Jersey and Illinois were insolvent before Covid-19 arrived even if most people did not realize it. Does it make sense to delay the inevitable now that the effects of Covid-19 makes that clear to everyone? Is it not time to clean up the mess rather than push it further down the road?

I must also admit that I have been disappointed that more state and local governments have not been as aggressive in mitigating their operating expenses as they have been at attempting to mitigate the spread of Covid-19.

How many public sector employees have been furloughed or laid off even if they no longer were performing their regular work activities when the Covid-19 shutdowns began?

DMV's are closed. Libraries are closed. Schools are closed.  Online instruction is being conducted but how does this apply to a physical education teacher, an art teacher or the Assistant Principal who normally is dealing with discipline issues? How does it apply to the high school History teacher who has 4 sections of U.S. History but who records one class session for the students in all four classes to view? What about the school nurse and the cafeteria workers?

I don't want to see anyone lose their job but government seems to take for granted that the tax money is always going to be there. There is no such luxury in the private sector. How many of the 26 million people who have filed for unemployment have been public sector employees?

Yes, I know that is not the job they were hired to do. However, we don't need them to do that job right now. However, we have other pressing public needs. These are not normal times. It requires thinking beyond simple solutions such as getting the federal government to bail us out or raising taxes next year to cover the revenue shortfalls.

Make no mistake, it appears that some very hard times and hard decisions are looming on the horizon for state and local governments. These decisions will be made even harder by public sector unions who have no interest in serving the public. They have only one interest---protecting their turf---and the Democrat party is unwilling to challenge those unions because it relies on them for money and votes.

It is important to remember that there is no real legal or economic reason for the very existence of a public sector union in the first place. In fact, liberal luminaries in the 1930's such as Franklin D. Roosevelt and Fiorello LaGuardia were opposed to public sector collective bargaining for the simple reason that it threatened the broad needs of the citizenry. That is why it was illegal for most government employees to unionize until well into the 1970's.


The historical basis for unions in the private sector is based on insuring a balance of power to insure that workers receive a reasonable share of profits and work in safe and sanitary conditions. Governments doesn't make profits to share. They only levy taxes. In addition, has anyone ever heard of a government worker toiling in a sweat shop? They also work in a monopoly situation meaning that if they provide poor service, no service, or they strike, there is no corresponding power by the consumer to go elsewhere as there is with a private sector business that is unionized.

In addition, in the private sector, unions are balanced against managers who have a natural incentive to push back on union demands. In the public sector no such tensions exists. More often than not the elected officials on the other side of the bargaining table are incentivized to give in to the unions for their own political survival. Those politicians often know that they would not have been elected (nor will they be reelected) without that public sector union money flowing into their campaign coffers.

We have not even begun to see the effects that Covid-19 is going to have on state and local governments.

It is safe to say that anyone or anything associated with these governments is not safe.

First order, second order, third order effects. There is going to be a lot of things in play.

Things have been set in motion that many state and local governments are ill-equipped to deal with and for which we have no idea what the final consequences will be.

The only thing that is certain is that the old order will be seriously challenged as the full damage of Covid-19 is calculated.