The investment story of 2017 was the meteoric rise of the cryptocurrency Bitcoin.

That return pales in comparison to what you would have had if you had invested in Bitcoin when it started in 2009 when the value was essentially zero. The first Bitcoin exchange occurred in March, 2010 with a per coin value of $0.003. In May of that year the first real-world transaction took place with 10,000 Bitcoin being exchanged for two pizzas. The value of that Bitcoin that was exchanged for $25 in pizza in 2010 is now worth $133 million.

However, consider the fact that although Bitcoin finished the year at a price of $13,860 it had actually risen as high as $19,343 two weeks earlier.! I am not even going to attempt to calculate the return at that point in time. However, had you invested then you would have lost 28% of your money in two weeks.

There is no doubt Bitcoin has boomed. However, where does it go from here?

On the question of whether Bitcoin is a bubble look at this chart prepared by Convoy Invesments in October (when Bitcoin was priced at a mere $7,800) comparing the price action of Bitcoin since 2014 to other famous investment bubbles, including Tulipmania in Netherlands in the 1600's. 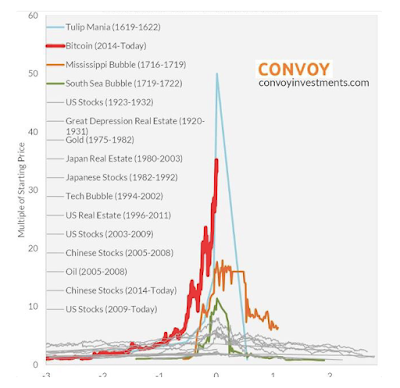 Bear in mind that this graph was prepared when Bitcoin was valued at about half of what it is today! Bitcoin puts all other bubbles to shame if you look at it from that perspective.

If you are not familiar with the Tulipmania bubble you ought to read my post about it that I published three years ago. Not much is different today than it was 400 years ago when it comes to delusions that overtake the multitudes and the madness that runs through crowds.

The one common aspect of all bubbles is that they ultimately burst and take prices down to near the place that they started from.

Is Bitcoin a bubble?

You never really know until you look back in hindsight.  Everything is very clear at that point.

However, there are clues.

It used to be said that you knew an asset class was overvalued when taxi drivers in New York City were talking about it and wanting to get in on the action. Perhaps that needs to be revised to Uber drivers today but individual investors usually come in late to any asset run up. Their entry into the market is a telltale sign that there are few buyers left.

A couple of clues on Twitter that I have seen recently about Bitcoin suggest we are seeing a bubble.

This is a tweet from one of the Fed Governors, Neel Kashkiri, who said that one of the customs agent at LAX asked him about cryptocurrencies as he was returning to the United States recently. It seems the agent had a friend who just took out a $35,000 home equity loan to buy to buy some cryptos.

Or how about this factoid that the average Bitcoin investor checks the price between 20 and 40 times per day.

Investors don't check the price of their holdings 20 to 40 times per day. That is what a speculator does.

I could be wrong but the Bitcoin boom seems to me to be a bubble that is going to burst at some point and bust a lot of investors.

Who will get hurt the most? My guess it will be those that saw their neighbor get rich, took out a home equity loan and were checking the price 40 times per day.

Another interesting factoid about Bitcoin.

According to a recent article in Bloomberg, about 40% of all Bitcoins are held by no more than 1,000 individuals, most who live in and around San Francisco. The top 100 control 17.3%. These early adopters have a cost basis in Bitcoin approaching zero. Small moves by this group could have major ramifications on the Bitcoin market.

The other interesting factoid about the Bitcoin market is the amount of energy that is used to complete a transaction. A lot of energy is used intentionally in a Bitcoin transaction in order to make fraudulent transactions costly thereby deterring those who would seek to misuse the currency.

How much energy is used? This article from The World Economic Forum explains.

Bitcoin transactions use so much energy that the electricity used for a single trade could power a home for almost a whole month, according to a paper from Dutch bank ING. 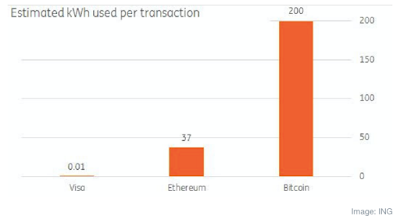 That is a lot of power. If that is the case how is Bitcoin ever going to supplant sovereign currency or gold as a store of value? Where is the energy going to come from to power all those electric cars of the future as well as transactions involving Bitcoin?

Warren Buffett is also less than optimistic about the long term prospects of Bitcoin.

Here is what he recently said on the subject to CNBC.

"In terms of cryptocurrencies, generally, I can say with almost certainty that they will come to a bad ending,"


What else could go wrong besides those 1,000 Bitcoin whales who could totally manipulate the market?

These are the major downside risks of owning Bitcoin according to BuyBitcoinWorldwide.com.

It bears repeating that Bitcoin is an experimental project and as such, a highly risky asset. There are many negative influencers of price, chief among them being the legislative risk of a major government banning or strictly regulating Bitcoin businesses. The risk of the Bitcoin network forking along different development paths is also something which could undermine the price. Finally, the emergence of a credible competitor, perhaps with the backing of major (central) banks, could see Bitcoin lose market share in future.

What is my advice?

Some advice for buyers from Warren Buffett on Bitcoin or anything else.

"Buy when everyone else is selling".

"Don't buy when everyone else is buying".