Most high school students are exposed to the periodic table of the elements in their science classes.

Anyone interested in investing should "periodically" review what is often called the "asset allocation quilt" that bears a strong resemblance to that periodic table.

This is the most recent chart that encompasses returns for 2017 and looks back to that ugly, ugly investment year of 2008. Ben Carlson who writes the blog, "A Wealth of Common Sense" calls it his favorite performance chart of 2017.


Here is a periodic table of the elements. Do you see the resemblance? 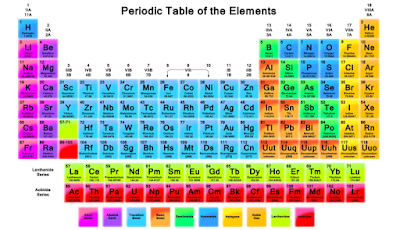 What is the value in "periodically" looking at the asset allocation quilt?

I think the biggest benefit is that it provides the investor with perspective. It is easy to lose the forest for the trees in investing. Viewing this chart periodically allows you to grasp the big picture unfolding around you in the investment world.

This particular chart also shows what a solid run we have had over the last ten years despite the horrific results in 2008 when Mid Cap stocks lost 36.5% for year and still had the fourth best "performance" for the year.

In fact, in both 2016 and 2017 there was not one asset class that had negative performance. Compare that to 2008 when there were only two asset classes (bonds and cash) that were positive.

Those horrible results in 2008 still did not prevent all asset classes (except Commodities) from producing positive returns over the 10 year period.

If you take away the 2008 results, the nine year returns have been fantastic as long as you did not have too much in cash and you avoided commodities.

The longer-term returns shown here also once again prove that the best asset class for younger investors is small cap stocks. Over long periods of time (10 years and beyond) this asset class has consistently produced the strongest returns over almost all longer periods. This is even more particularly true of small cap value than small cap growth stocks.

If you are under the age of 45 you should probably overweight small cap stocks in your portfolio. You have time on your side to reap those additional returns. Small cap stocks will be more volatile along the way but history suggests you will be rewarded over the long term for that additional risk.

Looking at the chart it is also hard to ignore how long commodities have been out of favor. This has been due to deflationary forces in the world economy but as we begin to hear more about hints of inflation you have to think commodities are due for a turnaround. It is not often that you see any asset class stay down that long relative to other investments.

Carlson the following as other reasons that this is his favorite performance chart. They are all great reminders for any investor.


Look at the chart above one more time.

Don't forget to periodically review new versions of the chart in future years to stay on track.
Posted by BeeLine at 6:02 PM