Article II, Section 3 of the U.S. Constitution, requires that the President periodically "give to the Congress Information of the State of the Union, and recommend to their Consideration such measures as he shall judge necessary and expedient." (emphasis added).

President Trump fulfilled that obligation on Tuesday night in a manner worthy of someone who fully understands the use of television, the power of inspiring stories and the value of playing offense rather than defense.

Ronald Reagan created the modern version of the SOTU address by incorporating ordinary American citizens into his address and recognizing them in the gallery for the television audience to see and appreciate. This device was the brainchild of Reagan's advisor, Michael Deaver, who was a master at producing powerful symbolic imagery to support the President's messaging.

Reagan first used the device in the 1982 State of the Union address when he recognized a young government employee who had jumped into an icy Potomac River two weeks prior to the SOTU to save a woman who had survived the crash of Air Florida flight 90 which had crashed into the river. The man's name was Lenny Skutnick. This is what Reagan said that night.

Just two weeks ago, in the midst of a terrible tragedy on the Potomac, we saw again the spirit of American heroism at its finest: the heroism of dedicated rescue workers saving crash victims from icy waters.

And, we saw the heroism of one of our young government employees, Lenny Skutnik, who, when he saw a woman lose her grip on the helicopter line, dived into the water and dragged her to safety.


Reagan may have initiated the use of theatrics like this in the SOTU but Donald Trump took the device to an entirely new level last night.

The result was undoubtedly the most memorable SOTU I have watched since Reagan's 1982 address.

Time and again Trump wove inspiring stories of American and human spirit into his address to support the broader points he was trying to make.

There was the young, female Coast Guardsman who had jumped out of helicopters to save people in the Houston floods..

The young fireman who saved schoolchildren in the California fires.

The young black man in Ohio who had lost his job in the 2008 recession but who had gotten retrained as a welder and was now working for a company that is rapidly expanding due to the Trump economy.

The two black couples from Long Island who had had their teenage daughters murdered by illegal immigrant gangs.

The Hispanic ICE agent who was battling those illegal immigrant gangs.

The police officer in New Mexico who came upon a a pregnant woman who was about to inject herself with heroin and told her to stop or she was going to harm the baby. The police office and his wife ended up adopting that baby.

The parents of Otto Warmbier, the American college student, who had been arrested in North Korea for taking a poster and was ultimately sentenced to 15 years hard labor. He was returned to the United States after one year in prison in a vegetative state. He died days later raising questions as to what the North Koreans had done to him in that year.

A defector from North Korea, who despite being disabled with the loss of a leg, had traveled thousand of miles to escape the tyrannical regime. He now works from South Korea to help rescue other defectors.

Trump clearly knew heading into his address that he would likely not get much applause or appreciation for anything he said from the Democrats in attendance. I think Trump crafted much of the speech to see just how far the Democrats would go to sit on their hands and glumly stare at him no matter what he said. 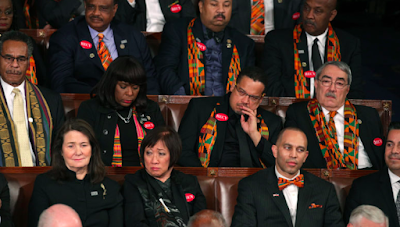 Who can be against any of that?

This is the reaction of Democrat House leaders Nancy Pelosi and Steny Hoyer right after Trump recited those accomplishments. Pelosi and the Democrats were clearly "not impressed." 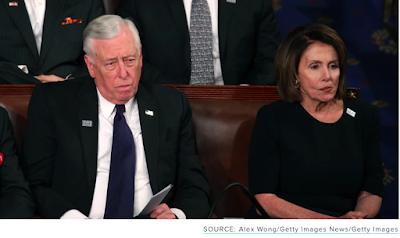 It was also true when Trump offered to legalize and provide a path to citizenship to nearly 2 million  DACA illegal immigrants in a bipartisan deal, a proposed infrastructure plan and a proposal to lower prescription drug costs.

These are ALL "Democrat" issues but the Democrats still sat on their hands.

It was not a good night for the Democrats. It is as if they did not know what to do.

This was particularly true when it came time to recognize those heroes in the gallery. You could see a look of desperation and dismay on their faces.

Do we stand for the black welder who is benefitting from the Trump economy?

Do we stand for those black parents who got killed by an illegal immigrant?

Do we stand for the Hispanic ICE agent?

Do we stand for the white policeman and his wife who adopted the baby from the heroin addicted mother?

The Democrats were put on the defensive in all of these situations. The emotion of the story contradicted their normal stereotypical response.

Of course, the liberal political pundits and mainstream media weighed in right after the speech and called it "partisan"and "divisive".

Self-congratulatory?  I checked the record. Trump used the word "I" 29 times in the speech. He used "we" 129 times. He used "our" 104 times. By contrast, Barack Obama referred to himself 100 times in his first SOTU speech.

I don't recall Pelosi ever saying that Obama gave  a "self-congratulatory speech".

Despite what the press, the pundits and the politicians say, the real audience of the SOTU are the people of the United States.

And the polls suggest that they liked what they heard.

75% of those surveyed in a CBS poll stated they approved of the President's message.

That included 97% of Republicans and, more importantly from a political perspective, 72% of Independents. Even 43% of Democrats approved of the President's message.

I guess the press, the pundits and the Democrat politicians do not know as much about the American people as they think they do.

Of course, there was a clue that was true based on the results of the November, 2016 election.

What was more interesting was looking at some of the internals in the CBS poll.

By a margin of 72%-28%, those polled stated that they were in favor of Trump's immigration proposal.

By a margin of 81%-19% the survey indicated that voters thought that speech attempted to unite rather than the divide the country.

By a margin of almost four to one, viewers of the SOTU felt that the policies they heard Trump outline would help them rather than hurt them.

There are few people on this earth that successfully combine both substance and style.

Barack Obama had a lot of style but we saw little substance over eight years.

Donald Trump was elected based on his substance but even many of his supporters cringe at his style.

Last night looked to me like an effort by Trump to focus on style without sacrificing the substance that got him to The White House.

If Trump can add more style like he did last night, the Democrats may have many more glum days and nights ahead of them.

Substance and style is an unbeatable combination.

Donald Trump knows this. The question remains whether he can do it, not just for one night, but for the next three years?