The United States of America was founded by men of deep faith. There are references to God four times in the Declaration of Independence. The Founders believed strongly in the principle that fundamental individual rights flowed from God and were not derived from any King or government.

“...all men are created equal, that they are endowed by their Creator with certain unalienable Rights, that among these are Life, Liberty and the pursuit of Happiness.”


The Founders also had a deep distrust of power. They were especially concerned about centralized, sovereign power at a national level. As the U.S Constitution was drafted and discussed there was general agreement that centralization of authority could easily lead to tyranny. This is what ultimately led to the incorporation of the Bill of Rights into the Constitution so that it was made clear that the new federal government would have limited powers particularly as it concerned individual rights.

All of this was done by our Founders because of concerns that a deeply entrenched federal government and bureaucracy might put its own interests in power over the rights of the governed.

The people who supported Donald J. Trump for President in 2016 were also predominantly people of faith.

Exit polls indicated that Trump beat Hillary Clinton by 58%-39% among those people who described themselves as Protestant/Other Christian.

More tellingly, Trump beat Clinton 81%-16% among white Evangelical Christians. This a group that made up 25% of the electorate so there is little question that people of deep faith put Trump in The White House.

Many have looked at this support and wondered how a brash, brazen, thrice-married guy like Trump could garner that much support of people of faith.

I think a large part of it is that Christians saw a chance for their voice to be heard with Trump. A voice that had been consistently crowded out for many years before. Was he an imperfect man? Absolutely. However, aren't we all?

There were some in the evangelical community who also believed that Trump was a man of destiny. That he was a man that God had prepared and delivered for this time.

I took interest in this thinking somewhere near the end of the primary season. I was not an early Trump supporter for the simple reason that I believed he was unelectable in a general election. There was too much baggage, too much bluster and too much Twitter around Trump for him to ever win election.

About this time I came across what some in the Evangelical Christian community called a "Trump Prophecy" in which a retired firefighter from Florida claimed that he had heard God speak to him in 2011 that Donald Trump would be President. This is how Mark Taylor's "Commander in Chief" prophecy begins which he wrote on April 28, 2011.

The Spirit of God say: I have chosen this man, Donald Trump, for such a time as this. For as Benjamin Netanyahu is to Israel, so shall this man be to the United States of America! For I will use this man to bring honor, respect, and restoration to America. America will be respected once again as the most powerful and prosperous nation on earth (other than Israel).


When Trump did not run in 2012, Taylor thought he had gotten it wrong. However, he gave the prophecy to Christian Evangelical leader Mary Colbert in 2014 and she pointed out to Taylor that the second paragraph of the prophecy spoke of events that would occur "when he (Trump) announces he is running for President.

The Spirit of God says; The enemy will quake and shake and fear this man I have anointed. They will even quake and shake when he announces he is running for president; it will be like the shot heard across the world. The enemy will say, "What shall we do now? This man knows all our tricks and schemes. We have been robbing America for decades; what shall we do to stop this?"


We now know that Donald Trump was elected President despite very few in the political or media realms giving him any chance.

He won despite unprecedented media attacks.

He won despite a good portion of the political class of his own party not supporting him.

I have followed politics very closely for close to 60 years and I have never seen anything like it.

Upon Trump taking office something else has come into greater focus.

The entrenched bureaucracy, political class and media establishment that has inundated and infiltrated Washington, D.C.

It is almost as if when Trump was elected they did say "What shall we do now? This man know all our tricks and schemes."

Consider that federal bureaucracy. A recent report by OpenTheBooks.com puts the federal administrative state in context when you consider that there are nearly 30,000 federal government employees who make more than any of the nation's 50 state governors---$190,823 per year.

Federal government pay is the primary reason why the five richest counties in America are all the counties surrounding the District of Columbia.

I doubt that any of our Founding Fathers could comprehend these facts. Everything they did in those founding documents was done with the intent of limiting the concentration of power or privilege. It would be inconceivable to them that the 30,000 federal government employees could make more than the highest paid state governor.

There is no question where the political allegiances of these bureaucrats and other swamp creatures lie either.

I wrote in my post on "Swamp Dollars" that Trump lost to Hillary 90.5% to 4.1% in the District of Columbia in the election.

It was not much better in the other counties adjoining the District of Columbia. These are the percentages of the vote that Trump garnered in 2016 in these bedroom communities that are contiguous to D.C. as reported by Politico.com.

Foreign dictators who fix their elections do not win by the margins that Hillary won in D.C. and Prince Georges County.

You see the same pattern in the donations made by those federal government employees.

Hilary Clinton received an astounding 95% of all the political contributions made by federal workers in the 2016 Presidential campaign.


Do all these numbers not speak volumes of how deep the swamp is?

Of course, we don't expect the swamp to infiltrate the Department of Justice and the Federal Bureau of Investigation. However, recent disclosures have shown that is exactly what seems to have occurred.

We don't expect the Director of the FBI to write a memo exonerating Hillary Clinton over her email scandal before she and a number of other key witnesses were even interviewed by the FBI.

We don't expect that the Deputy Director of the FBI would not recuse himself from the Clinton investigation after his wife accepted $700,000 in political fundraising from a close Clinton associate.

We don't expect to find out that classified emails of the Secretary of State are found on the unsecured laptop of a convicted child molester.

We don't expect to find out that the wife of a senior Justice Department official was hired by Fusion GPS to assist in writing the infamous "Trump dossier".

We also don't expect a supposedly independent Special Counsel staff to be replete with lawyers and investigators with deep biases and unchecked conflicts of interest.

We may find out many more things we don't expect in the coming weeks and months after the Justice Departments's Inspector General completes an investigation of how the FBI handled the Clinton investigation among other matters. These may include how the FBI got involved in the "Trump dossier" and whether it was the basis for the FBI to surveil the Trump campaign through national security resources via a FISA warrant.

Of course, the Deep State is not confined to the Washington bureaucracy. It also now clearly encompasses the mainstream media that covers Washington. The bureaucrats, the political class and the media are in bed together.

A recent study by Pew Research of the first 60 days of the Trump presidency found that just 5% of stories were positive. Even more revealing, look at the number of negative stories compared to other Presidents. And I don't think it has changed much over the ensuing 9 months either. Here is a comparison of Trump to other recent Presidents.


If you listen to the mainstream media you have to think the Trump is the worst, most unpopular President of all time.


How can Trump have an approval rating like that when you look at the negative coverage he has received.

Could it be that his supporters have FAITH?

They (the enemy) will say things about this man, but it will not affect him, and they shall say it rolls off of him like a duck, for as the feathers of a duck protect it, so shall my feathers protect this next president.


It does seem interesting that when you look at the year 2017, well-known liberal leaning entertainment and media figures (Weinstein, Spacey, Lauer, Rose etc), suffered the most damage to their reputations.

All the while, Donald Trump survived the Access Hollywood tape last year and was elected President of the United States a month later.

How will we truly know whether there really is something to the Trump Prophecies?

There is one prophecy that still has not been fulfilled. This is the last sentence.

Even mainstream news media will be captivated by this man and the abilities that I have gifted him with, and they will even begin to agree with him; says the Spirit of God.


I ask...if that day comes how could anyone not have FAITH? 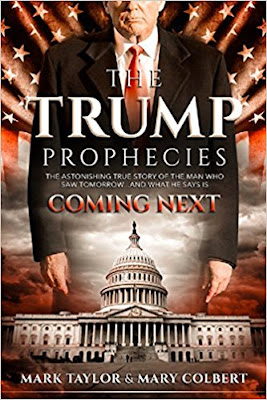