Time magazine's Person of the Year for 2017 was what they called "The Silence Breakers". The women who came forward during the year to share the stories of sexual harassment and assault that they had experienced. 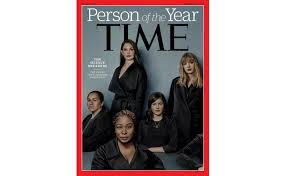 The movement is also signified by the hashtag #MeToo as countless women came forward on social media to call out high profile men who had used power and privilege to take advantage of women.

The stories that came out about Harvey Weinstein, Russell Simmons, Matt Lauer, Charlie Rose, Al Franken and many others are truly cringe-worthy.

It was not easy for these women to come out and tell their stories, especially considering the positions of influence that these men held in entertainment, news and politics.

However, at the same time, questions have been raised, many of them by women, as to whether the entire #MeToo Movement has gotten a little bit off the rails.

Heather MacDonald wrote a very thought provoking piece in the City Journal last week titled "Policing Sexual Desire"  that is well worth reading. Her key point is whether the entire #MeToo Movement is based on an impossible premise that begins with the feminist idea that "differences between men and women have nothing to do with biology but are socially constructed in their entirety."

In other words, many feminists believe that biology, sex and gender differences have nothing to do with anything. Sexual interactions between men and women are not driven by how we are wired but are due to unequal power relationships and a patriarchal society.

MacDonald doesn't see it that way.

Actually, sexual harassment is usually just about sex, even if differential power is used to obtain it. There is nothing inconsistent or hypocritical about liberal male icons championing feminist issues like abortion or equal pay while also putting heavy-handed or offensive moves on females. Charlie Rose, Matt Lauer, and Harvey Weinstein would all undoubtedly be thrilled to have a female president, since they would thereby be routing Red State misogyny. For now, however, they want access to females’ panties.


Ignoring basic biology and the way the genders are hard-wired is a recipe for trouble. However, that is exactly what is happening as feminists point to "patriarchy" and "dangerously outdated gender norms" as the problem rather than the fact that there is an inherent innate difference in the way men and women think about sex.

“Dangerously outdated gender norms” are not what make it difficult to say no to sexual advances; contemporary gender norms have confused these already fraught situations. Traditional mores set the default for premarital sex at “no,” at least for females. This default recognized the different sexual drives of males and females and the difficulties of bargaining with the male libido. The default “no” to premarital sex meant that a female did not have to negotiate the refusal with every opportuning male; it was simply assumed. She could, of course, cast aside the default assumption; that was her power and prerogative. But she did not have to provide reasons for shutting down a sexual advance.


I grew up in a different time. I started college in the Fall,1968 when men were not allowed beyond the lobby in a women's residence hall. This was liberalized in the winter semester so that one Sunday afternoon per month co-ed visiting was allowed. However, the door to the room had to be open and everyone in the room had to have one foot on the floor at all time.


There was a reason that those types of rules were in place. Yes, as students we hated it, but the fact is that the administrators had a very good idea about gender norms. After all, those norms had been in place for thousands upon thousands of years. They knew that the more that men and women mixed the greater the chance that regrets might come out of it.

Men are primed to pursue. That pursuit can indeed turn primal at times. Women want to be pursued. It is not patriarchy or unequal gender norms that causes this. It is biology. It is the gender differences that many today want to argue do not exist.

At the end of her article, MacDonald asks where it is all headed?

Western culture is in fact the least patriarchal society in human history; rather than being forced to veil, females can parade themselves in as scantily clad a manner as they choose; pop culture stars flaunt their promiscuity. There is not a single mainstream institution that is not trying to hire and promote as many females as possible. And yet females are apparently still so beaten down by sexism that the Times’s gender editor Bennett asks rhetorically if females should even be deemed able to consent to sex, since “cultural expectations” make it awkward to say no. How long will it be before feminists demand the return of chaperones?


It seems that those open door Sunday visits may have to make a comeback along with the chaperones. I hope not. I would just like to see a little sense and sensibility when it comes to recognizing there are differences in the sexes.  I think the "consensus of scientists" is pretty clear on this one and has been since the beginning of time. Why then do so many act as if it does not exist?