A study in 2010 concluded that U.S consumers are exposed to 3.6 zettabytes of data every day.

That works out to about 34 gigabytes per person on an average day.

And that was almost 8 years ago!

I could not find a reliable current number. 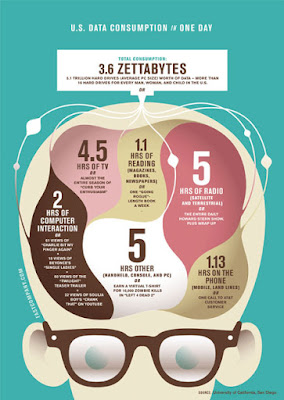 Another study says that we receive five times as much information in a day as we did 30 years ago.

We are exposed to as much information in a day as our 15th century ancestors were exposed to in a lifetime according to recent PBS special on "The Human Face of Big Data".

That is a lot of data.

However, how do we make sense of it all?

And how much of it does anyone really understand?

I have often written in these pages that "Context is everything when assessing anything."

It is at the core of why I write BeeLine. I try to put facts, data and issues in context. You need context, just not content, to understand something, to form opinions and make judgments and decisions.

You can not evaluate anything or make any decision in a vacuum.  It is simply impossible.  You need a frame of reference. You determine whether a girl is beautiful based on having seen thousands of girls. You decide whether a shirt is a good deal after looking at other shirts and their prices.  A house is a bargain only after you evaluate the local market. After all, the identical house might be a bargain in Beverly Hills but massively over-priced in Bloomfield Hills.

Let's look at a few examples of where context adds important meaning that I picked up in my review of some of those more than 25 zettabytes of data this past week.

It is particularly true that you need context in assessing anything you see on social media. For example, on Twitter, short bursts of data shoot out all day long. I have found you definitely need your context filter to be up and running there. In my experience, it needs to be running on overdrive when any liberal politician takes to tweeting out "facts".

Let's look at a few examples from the past week.

We know it was cold in the Northeast and Midwestern United States this past week. In my hometown of Cincinnati the thermometer did not reach 32 degrees the entire week. Most of the time it was closer to 0 degrees. 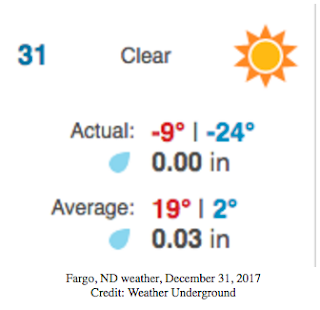 What did Al Gore have to say about this cold wave on Twitter?

The cold is actually being caused by global warming? Who knew? 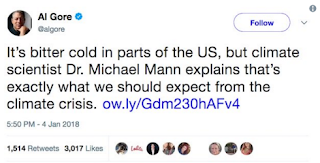 For context, it should be remembered that Al Gore predicted in 2009  that the north polar ice cap would be ice free by the summer of 2016. It is in no way close.

For additional context, consider that Dr. Michael Mann is the creator of the discredited "hockey stick" graphs of global warming that were proven to have been manipulated to show a warming trend that was not there.

To put this entire subject into further context, did you know that it has recently been colder in places like Fargo this past week than it has been on Mars?

For further context consider that Mars is 34 million miles further away from the sun than Fargo is. Consider further that there are no humans on Mars. Therefore, this additional warmth on Mars cannot be explained by anything to do with human activity. How could that be?

We also have New York City Mayor Bill DeBlasio tweeting away on the subject of the enforcement of marijuana laws by the Attorney General. He calls it a "vendetta".

For context, let us remember that under the Controlled Substances Act (21 U.S.C. Sec 811) it is illegal under federal law to possess, cultivate or distribute large quantities of marijuana. The Attorney General of the United States is charged with enforcing the laws of the United States.

If Congress wants to change federal law on marijuana then they should do it. The same with immigration law. Failing that, we should expect that our laws are enforced as written. If not, why do we have laws? Why do we have Congress?

However, for real context on the Mayor's tweet, consider that 60,990 people have been arrested for marijuana in NYC while Bill de Blasio has been Mayor. (52,730 of them have been black or Latino).

Who really seems to have a "vendetta" against people of color?

Finally, let's consider this tweet from the Governor of New York. 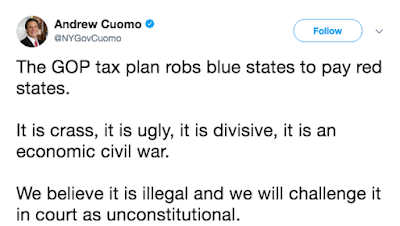 Cuomo is saying that under the new tax law the blue states are robbing the red states because the federal tax deduction of state and local taxes has been limited.

He goes on further to say that it is ugly and divisive in addition to being illegal and unconstitutional.

That is an interesting argument to put in context.

If what Cuomo says is true, what was happening when taxpayers in blue states were deducting hundreds of billions of state taxes every year from their federal taxes while taxpayers in red states were deducting little or nothing? Weren't the red states being robbed by the blue states under the prior law for decades upon decades? Wasn't that an economic civil war? Wasn't that crass?

It is especially important when assessing the tweets of liberal politicians who are trying to get their share of the over 3.6 zettabytes of data in play every day day.

My advice is to expend the effort to get another .1 gigabytes in context as an antidote.

BeeLine is a good option to do that.

Thanks for visiting. Visit often. Subscribe by entering your email in the upper right corner of this page and it will be delivered to you.


For those interested in how much data is in a zettabyte here is a nice graphic from Karl Tate at TechNews Daily. 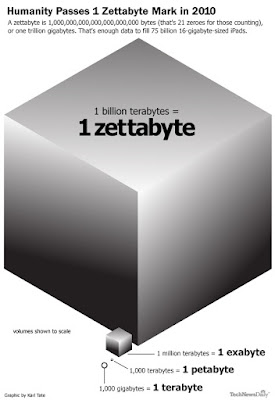