The Consensus of (Democrat) Scientists

One of the most popular blog posts I wrote last year was entitled "Consensus Isn't Science".

We hear a lot about the "consensus of scientists" when it comes to whether the earth is warming due to man-made causes.

The argument that is advanced from many Democrats is that this is "settled science" so it is ridiculous to even debate the issue.

In my blog post last April, I wrote the following.

When it comes to settled science, there is no doubt that we have climate change. It changes every hour, every day and every year. It has changed over the centuries.

The question is not whether it is changing but whether man is impacting that change and, even if that is the case, whether we can even do anything about it?

Whenever we hear about the "science" of human related climate change there is nothing "settled" about it. That is why we hear that this view is supported by the "consensus" of scientists.

Of course, "consensus" is not the same as facts. And consensus is not a scientific fact. A scientific fact is the law of gravity, the boiling point of water or the distance to the moon.

Prior to the 15th century, the consensus of scientists was that the earth was the center of the universe.

In the 18th century, the consensus of medical scientists was that blood letting was the best method to cure illness.

As recently as 25 years ago the consensus was that peptic ulcers were caused by stress. We now know it is caused by bacteria.

I could go on and on. In fact, in most cases like these, the consensus of scientists was proven wrong by just one person who did not believe the consensus and proved it wrong.


Why do I bring this subject up again?

I came across a very interesting survey recently by Pew Research that compared the views of Democrats and Republicans on how likely we should "expect harm from climate change." What was particularly interesting about the survey was that Pew broke the answers down by the level of science knowledge the respondents had. This was determined by a series of questions that evaluated the scientific knowledge of the participant.

Each political group was then divided between those who had high, medium or low science knowledge.

Let it first be noted that I know of no difference in views between Democrats and Republicans (with or without high science knowledge) that water freezes at 32 degrees. That is not a political statement. That is a scientific fact.

In effect, on this issue, politics seems to trump science.

How is it that man-made climate change is considered to be "settled science" if the major differentiator on the issue seems to be one's political perspective? 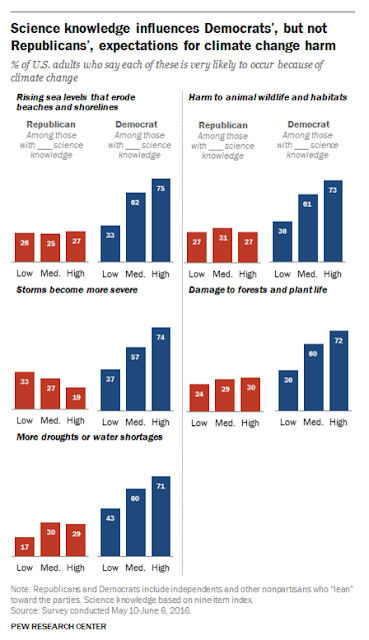 Notice as well that the medium and high science knowledge Democrat respondents in the survey are the outliers. If you take them out, the answers are relatively consistent across all the groups.

It is almost as if the "smarter" the Democrats get the more removed they are from the consensus of everyone else.

Of course, the explanation of this from liberal is that "higher science knowledge Democrats are just much more educated and aware than everyone else".  There is no doubt that is what they believe. However, believing it does not make it so.

You see similar patterns in the views of Democrats and Republicans on energy issues.

High knowledge Democrats are overwhelmingly opposed to offshore oil and gas drilling, fracking and coal mining. On these issues, they are far removed from the consensus of almost everybody else.

They actually favor nuclear power more than other Democrats. I guess it is really true that those High Science Democrats have not seen a solar array or wind turbine that they don't like (unless, of course, it is in their own backyard).

The next time that you hear about the "consensus of scientists" on climate change you need to put that in the proper context.

What is really being said is that it is a "consensus of  Democrat scientists".

The Pew Research survey shows just how true that is.