Doctor, Doctor, Tell Me It Isn't So

The media was in full meltdown mode Wednesday in learning that President Trump is in excellent health.

Even worse for them, in a test of his cognitive ability, Trump scored a perfect 30 out of 30.

The White House press corps spent nearly an hour grilling the President's physician Ronny Jackson (who by the way was also Obama's physician for all last two physical exams as President) on why this could be true.


It is a liberal's worst nightmare.

Trump doesn't eat kale, he doesn't jog, he doesn't do yoga, he plays golf, does not sleep very much, watches a lot of tv, and likes fast food.

How could he be in excellent health?

They simply do not believe it is possible.

Of course, there are many other things that they simply refuse to believe.

They cannot believe that Donald Trump was elected President.

They cannot believe that there are 63 million Americans who voted for him.

They cannot believe that Donald Trump does not think like they think.

They cannot believe that the President of the United States does not care what they think.

Therefore, they believe that Trump has dementia and the people who voted for him are deplorable.

Beyond all that it is just not fair. How can Trump be in better health than they are?

What is most interesting in all of this is that the media paid almost no attention to the health of Barack Obama.

That is despite the fact that Obama smoked and drank as President and has admitted that he used hard drugs when he was a young man.

Trump has never smoked, drank or used any drugs in his entire life.

The media also spent time at the press conference questioning the White House physician if Trump was really 6'3" and whether the scale he was weighed on was accurate.  The reason---they desperately want to report that Trump is "obese" based on the Body Mass Index scale that compares height to weight. (Trump is just below the cut-off based on his reported height and weight in the Doctor's report of the physical exam.)

Can you imagine any of this occurring if Hillary Clinton had been elected President?

I remind you that Hillary Clinton is the same person that went into multiple coughing fits during the campaign, nearly collapsed at the end of a campaign event causing her aides to have to stuff into her van while she also exhibited a strange head bobbing from time to time on the campaign trail.

If you would like to view Hillary Clinton's collapsing episode, you can view it here.

( I wrote about the questions surrounding Hillary's health in September, 2016)

How did the media report on these events and how vigorously did they follow-up on Clinton's health?

I believe we all know the answer to that.

I also believe we also know that no one would be questioning Hillary's BMI or whether her scale was accurate if she was in The White House.

We have reached a very troubling place in this country when the media seems to be rooting for the President to be unhealthy.

They have spent countless hours arguing that President Trump is mentally unbalanced and unfit for office.

How can it not be true if they have reported it to be true?

It is incomprehensible that a independent medical professional would not agree with them that Trump is not well.

We knew before this that the mainstream media is very unbalanced in its reporting.

Look no further than this chart that compares positive and negative statements on the evening news about President Trump during 2017. 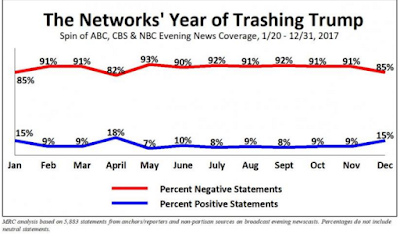 Unfortunately, what we saw this week appears to show the media is not only unbalanced in their coverage but they have become mentally unbalanced due to their unhealthy dislike of the President.

To me it is very, very sad.