My last post highlighted the significant financial challenges in Illinois.

Those challenges are principally the result of massively underfunded pension plans for public sector employees in the state.

It has often been said that desperate times spur people to undertake desperate measures.

You can see how true that statement is when you consider that there are those in Illinois that are now suggesting that the state borrow $107 billion in order to shore up the massively underfunded public pension plans in the state. Illinois officially reports that its state public pension funds are underfunded by $129 billion. Moody's estimates the real number is more like $250 billion. Thus, borrowing $100 billion would not even fill the entire gap.

No state or municipal government has ever attempted to borrow anything close to $100 billion in the public debt markets.  In fact, all state and municipal bond offerings in the United States in 2017 totaled somewhere in the vicinity of $400 billion. Add to this the fact that Illinois is also one step away from being considered a "junk credit" and you can see how desperate this measure would be.

It should also be noted that $100 billion of debt would be 50% more than Puerto Rico had accumulated in its record breaking run to insolvency.

Consider further that Illinois has just $26.3 billion in general obligation debt outstanding today. Do they seriously believe they are going to issue four times this amount of debt on a bet that they can get pension returns in excess of the debt cost?

Of course, those pension returns would have to be realized right after the stock market has increased 300% in the last nine years and over 40% since President Trump was elected. By the way, as evidence that there are many in the state who are not sure is what is good for the state, only 39% of Illinois voters cast their ballots for Trump in 2016.

Zero Hedge calls the plan "irrational and utterly bizarre" and will undoubtedly "insure that Illinois would default even faster in the future."

You can see from this chart from the Zero Hedge article why Illinois is fighting what will inevitably be a losing battle. The pension liabilities are piling up much, much faster than the assets and the return on those assets. 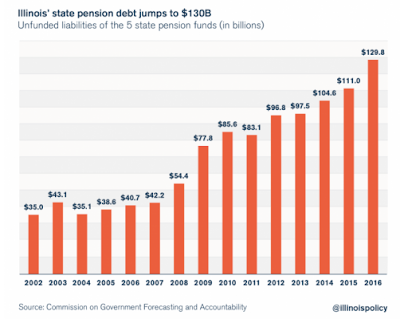 Consider that despite the 300%+ return on the stock market since 2008, the state's public pension plans have gone another $75 billion in the hole over that same period.

According to these numbers, the state of Illinois only has 36 cents in assets to meet every dollar of pension liability.

This suggests that the destiny of Illinois will culminate in much more desperate times ahead.

Can you imagine what these numbers would look like without those stock market gains over the last nine years?

Can you imagine what they will look like with a bear market?

Can you imagine what the financial condition of Illinois would be with a bear market and $100 billion of additional debt?

We have yet to see what truly desperate times really look like in Illinois.

I predict we will see it before all is said and done.

We will then see some truly desperate, desperate measures.