One of the little noticed provisions in the tax bill that passed right before Christmas was a new tax on university endowment funds.

The new law levies a 1.4 percent annual excise tax on investment income at private colleges with an enrollment of at least 500 students and with assets valued at over $500,000 per full-time student.  It is expected to raise approximately $1.8 billion in revenue over 10 years.

This is a list that InsideHigherEducation.com compiled of the approximately 30 colleges and universities that are expected to be affected by the tax law change. The order of this list is based on the amount of endowments funds per student at each school in descending order.


Predictably, the administrations of these schools lobbied hard against this provision claiming that it would weaken financial aid to students, research initiatives and faculty. 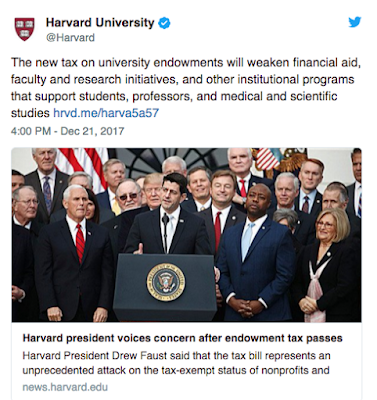 The Harvard endowment fund stood at $37.1 Billion at June 30, 2017. It is obviously higher today due to stock market gains since that time. I guess Trump hasn't been all bad for these academics.

Harvard made an 8.1% return on its investments in its endowment in the 12 months ending June 30, 2017. That is $3 billion.  Before this new law, Harvard owed no taxes on this income. The new law will levy a 1.4% tax on net investment income. That would amount to about $42 million on $3 billion of income. That does not sound like a bad deal for Harvard, does it?

That seems especially true since most of the administrators, faculty and students at Harvard are strongly in favor of redistributive tax policies by the federal government. After all, aren't we supposed to tax the rich so that we can spread that money around to others that really need it? Who better to do that than the federal government? At least, that is what we are usually told by those at Harvard.

Or course, Harvard has nothing on Princeton. Princeton's endowment fund per student is a staggering $2.7 million per student (50% more than Harvard). Princeton earned 12.5% on its endowment for the fiscal year ending June 30, 2017 meaning it brought in $337,500 in investment income per student. The undergraduate tuition at Princeton is $47,140 this year.  Princeton could pay the entire undergrad tuition of each student out of the income and have nearly $300,000 left over.

I wrote about the high cost of higher education and the enormous size and tax-free status of some of these university endowment funds last April.

I pointed out at that time that if you took all of the Ivy League school endowment funds in 2016 there was enough money in them  to pay for the entire tuition of every undergraduate student at the Ivy's for the next 51 years.

The eight Ivy League universities actually derived more in revenues from the federal government through government contracts and grants ($25.27 billion) than in supporting their educational mission ($22 billion in student tuition) for the fiscal years 2010-2015.

That government support is so large that the eight Ivy League colleges actually receive more money annually from the federal government than do 16 states!


Let's recap all of this to put the entire issue in context.

Billions and billions of dollars are sitting in tax-free university endowment funds.

The annual income from these funds is currently much in excess of the tuition being charged to students and yet tuition is still unaffordable to most students and their families.

The growth in those endowment funds has been aided over the years by billions of dollars in charitable deductions that reduced federal tax revenues.

Billions of dollars in federal government contracts and research grants are provided to these same universities annually.

In fact, the eight Ivy Leagues get more money from the federal government than do 16 states.

And yet these universities are saying that their educational mission is going be compromised by having to pay a 1.4% tax on investment income that will raise a couple hundred million per year?

Of course, Nancy Pelosi, Chuck Schumer, Bernie Sanders and Elizabeth Warren want you to believe that the tax bill was nothing but a hand-out to the rich.

I think these rich colleges would beg to differ.