Why do we get fake news?

I have thought about this a great deal and it seems to be a product of the liberal bias of mainstream media. I don't think they consciously set out to report fake news. However, their bias blocks the filters in their brain that should be telling them that something does not add up.

As a result, they end up reporting "their truth" rather than "the truth".

I have previously written that it is hard to argue with the theory of liberal ideology. Most liberal ideas are well meaning and well intentioned. In a theoretical laboratory these ideas make a lot of sense.  I think that is why so many academics are liberal. The ideas make such great sense in the classroom or a textbook. The world would be such a great place if they did work. Unfortunately, in the real world these ideas must face reality. A reality where human beings make decisions based on incentives or disincentives relative to their own self-interest.  A reality where unintended consequences often have much greater effects than the intended consequences.

I think most liberals also have an an inherent insecurity that their liberal ideology is not as perfect as they profess it to be. After all, they live in the real world as well. Many don't practice what they preach when it comes to their personal lives. Peter Schweizer wrote an entire book on this liberal hypocrisy over a decade ago titled "Do as I Say (Not as I do). 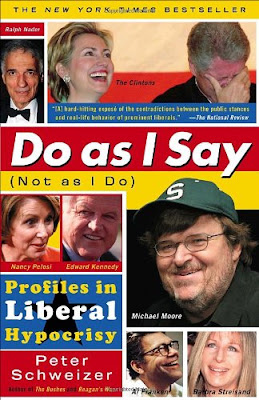 In my view, this inherent insecurity causes them to work extra hard to prove that liberal ideas are "right" and conservative ideas are "wrong" and "their truth"is better than "the truth".

It is certainly the reason that they are working so hard to demean President Trump. The greatest horror that they would ever have to endure is for Trump to be successful. It would literally destroy much of the liberal narrative. That is why they are driven to make sure it is not about "the truth."

All of this is not to suggest that fake news only is promulgated from liberal sources. It comes from conservatives as well. However, you generally only see it on the internet or social media where it does not get the visibility and the distribution that the mainstream media provides.

Fake news stories don't just involve President Trump either. We see it in a range of stories.

A good example is the story of the 2017 graduating class of Ballou High School in Washington, D.C. This school got a tremendous amount of media attention last June when it was reported that every one of the 190 graduating students in one of poorest sections of Washington had been accepted to college.

This is how NPR.org described this success story last June.

Ballou is in the southeast region of D.C. and by nearly any measure, the school is struggling. Staff at Ballou are tasked with overcoming major barriers established by poverty.

So how did this dream become a reality? It started with a pledge from the class of 2017 when they were just juniors looking ahead to their final year of high school.

But it was a strong support system within D.C. Public Schools that made it a reality. For months and months, staff tracked students' success, often working side-by-side with them in the school library on college applications, often encouraging them to apply to schools where data show D.C. students perform well.


Who could not like this story?  A dedicated staff at a struggling high school sends 190 impoverished minority students (98% of students African-American, 2% Hispanic) to college.

It was particularly attractive for liberal news media.

If only it were true.

Unfortunately, it was fake news.

It was the type of story that all of us wishes were true. However, liberal journalism wishes so hard that it reports "stories" as news despite what should have been some glaring warning signs in the initial report.

Here are a couple of examples of warning signs that got my attention that something did not add when I read the story initially. The quotes below are directly from the original story.

Last school year, the graduation rate was just 57 percent. And, when it came to meeting citywide standards in English, only 3 percent of students passed. No one passed the math.


Only 57% graduated the prior year and the graduation rate improved to 100% in just one year?

Not one student passed minimum standards in Math and only 3% passed in English in 2016 at this school and one year later all the seniors got accepted to college?

It started with a pledge from the class of 2017 when they were just juniors looking ahead to their final year of high school.


It started with a pledge with just one year of high school to go that they would all go to college? Really? If this was 7th grade I might believe it. By 11th grade almost everything is baked into the cake. You are not going to change the trajectory of many students in just one year.

NPR recently "updated" its reporting. The actual truth is sad. Consider a few facts from the new reporting that tells a different story about the 2017 graduating class at Ballou.

Former teachers at Ballou told NPR that more than a few students at Ballou could not read or write. Students roamed the halls with impunity and there was almost no enforcement of attendance. Many students who were at school congregated in the gym rather than go to class and nothing was done about it by administrators. Teachers were pressured to give passing grades and overlook past due assignments by students so they could graduate.

Here is the actual student performance for Ballou High School for the 2016-2017 school year based on the standardized tests students take in the DC school district (Partnership for Assessment of Readiness for College and Career "PARCC") for Math and English. This data was taken directly from the school's website. A student needs to be at Level 5 (exceeds expectations) or Level 4 (meets expectations) to be considered ready for college or a career.

Note that not one student met expectations in Math in 2016-2017 (same as previous year). 91% did not even "Approach Expectations" which is Level 3.

9% met expectations in English (up from 3% in prior year) but nearly 60% were at Level 1 in English on the PARCC test . 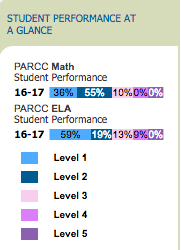 There is little doubt that school administrators and teachers at a school like Ballou have an enormous challenge. However, the answer should not be to give students a pass. And it certainly should not involve promoting students (and stories about fake student success) at your school.

The current school year budget for Ballou High School works out to almost $14,000 per student.

These are the salaries of the top 3 administrators at the school according to DC schools budget records.

In addition, administrators and teachers in the DC school district are eligible for bonuses of from $15,000-$30,000 for being considered "highly effective" on their annual evaluations according to NPR. DC public schools would not disclose whether any at Ballou received bonuses.

NPR is to be congratulated for stepping up and correcting the story about Ballou. However, why did they miss the obvious sign of "fake news" to begin with?

A recent tweet by longtime Washington journalist Ron Fournier speaks volumes about this issue and affirms my view that a substantial portion of mainstream media are less interested in reporting facts as advancing or defending their agenda and views.

Leave it to Brit Hume to put this in the right perspective in a reply to Fournier.

Let's see more news about "the story" rather than "their story".
Posted by BeeLine at 4:19 PM